I take a large pot, put water in it, add the cloves of garlic, a whole lemon (previously carefully-rinsed and cut in 2 pieces). And a whole chili pepper.
Once water starts boiling, I put the whole octopus and let it boil for about 30 minutes. Take care that the octopus always is covered by water while poaching.
After 30 minutes, turn the fire off and let the octopus continue to cook in its water for another half an hour. (This is called the passive cooking method).
Meanwhile, take a bowl and mix all the ingredients for the dressing. Then take the artichokes, peel the thickest surrounding leaves off, trim the pointed tops off and peel the stems. I take a stainless steel pot, pour some salted water, add the whole artichokes and cover using a bowl that with its weight, secures the veggies on the bottom of the pot during the cooking.
Artichokes has to cook for 6 minutes, then turn the fire off and let them continue “cooking” in the boiling water for 30 minutes (as I did previously with the octopus).
Now, take the octopus out of its pot and reserve it and keep it lukewarm. It has to result crunchy and not chewy.
Drain the artichokes and cut it in four quarters. Put them in a salad bowl and reserve.
Peel and cut the tomatoes, remove their seeds and dress with some good quality extra virgin olive oil and black pepper.
Chop the octopus and add it in the salad bowl with the tomatoes and artichokes, pour the dressing sauce that you previously prepared.
I prefer to serve this salad lukewarm, but you can also eat cold.
If you like fresh coriander, you can sprinkle some leaf as topping.
Buon Appetito!
This salad is perfect paired with a bottle of fresh white wine; at Tuscan-experience we serve it with Le Pupile’s white, poggio argentato, a nice wine from our friend winemaker Elisabetta Geppetti. 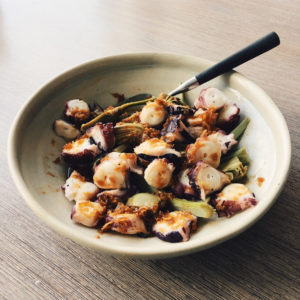 Ingredients (for 4 person) 1 kg about octopus (I use 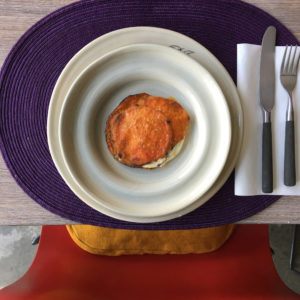 This is a dish that I partly start to prepare